Planet of the Day: Kepler 186f

Notice how the system is very compact, and how far away the fifth planet, 186f is compared to the other 4. Another fact of note is that the fifth planet orbits around 0.3-0.4 AU away from the star, which is similar to where Mercury is, or around one third the distance of the Earth from the sun. While that is still a huge distance, in terms of distances in our solar system, the planets are really close together.

Last post, I talked about how stars less than 10 solar masses ended as an electron degenerate objects called white dwarfs (with a caveat I will talk about later). But what happens when stars go over that mass? Stars above that mass creates a core that is above 1.44 solar mass. They can do this because the core temperature becomes high enough to fuse neon and oxygen into more massive elements.  There is a nice chart here to the processes in a 25 mass star. This is not as simple of a process as before. Elements like neon can’t just fuse directly. What happens instead is photodisintegration. High energy gamma ray hits an atom and spits out a helium nuclei and that is used to fuse with a larger element. So neon goes down to oxygen with photodisintegration, oxygen combines with oxygen to form silicon, and sulfur. And then the helium nuclei formed by photodisintegration combines with them until it goes to nickel 56 (28 proton + 28 neutron) and  iron 56 (26 proton + 30 neutron). As it does so, the cliched onion layer is formed in the core (note, the summary above is extremely simplified, as shell burning and all sorts of other fusions occur too):

At this point, a big problem ensues. Fusing iron and nickel 56 absorbs energy, instead of emitting it. Think about it this way. Let’s say photodisintegration happens on iron 56, which absorbs gamma ray and releases a helium nuclei, and the helium nuclei resulting from it is used to smash into an iron 56 and turn it to nickel 60. The gamma ray absorbed for the photodisintegration is greater than the gamma ray released after the fusion. This means that the energy needed to keep the core balanced against gravity is being taken away. Even worse, at these later stages, processes called electron capture occurs. This happens when a proton captures an electron and turns into a neutron. This takes away the electrons needed to maintain degeneracy pressure.  Those, combined with the loss of energy due to the domination of nuclear decays in which a lot of the energy is turned to neutrinos (ghost like particles, they can pass through matter unaffected and it is the product of nuclear decays and reactions), the core is teetering at the edge of collapse. Now the question is, how massive must the core be to overcome electron degeneracy?

For electron degenerate star cores, solar mass 1.4 is a special number. When there is no thermal pressure to counter act gravity, and the core is only being supported by electron degeneracy pressure, it is the mass in which the star collapses. This number is called the Chandrasekhar limit. Yet, the Pauli exclusion principle must hold. Two particles can’t be in the same quantum state (like space, energy, angular momentum, etc), and further collapsing the star would allow that to happen to electrons. So what nature does instead is electron capture, the electron goes on to combine with all the protons to form neutrons. Nature has avoided putting two particles in the same quantum state, and the core is now supported with neutron degeneracy pressure. This happens because two neutrons can’t be in the same quantum state, filling up all the lower energy levels, and this allows for a stronger opposing pressure that prevents further collapse.

What is left is an object composed of mostly neutrons, called the neutron star for obvious reasons. It is in an exotic, extremely dense state of matter, with all the 1.4 solar mass compressed into a ball the size of a city. Its gravitational force is such that if a 10 gram object were released a kilometer away, it would make an explosive impact of 10 tons of TNT (assuming I did my calculations right). This density is possible because an atom has a vast amount of empty space occupied by the electrons, unintuitively so. With the electron gone, all the neutrons can move a lot closer together, greatly reducing in size.

An important event that happens during core collapse is the supernova. While the collapse and electron capture is happening, the core heats up tremendously, and photodisintegration shreds the atoms in the core into helium nuclei. All three processes happen at the same time. Eventually all the matter coalesce together as if it were one giant atom of neutron. Meanwhile, during electron capture, a huge number of neutrinos are formed. Normally, they all pass through matter like ghosts, but there are so many of them, and due to the extreme conditions in the star, they still manage impart a tremendous amount of energy on the outer envelope. This causes the outer layer to explode, easily outshining an entire galaxy. This explosion is what you know as the supernova. During this explosion, the r-process causes the fusion of elements heavier than iron. The supernova, therefore, is not only a destructive process, but a creative one too, progenitors to all sorts of matter, without which we would only have mostly hydrogen and helium.

Supernovas are also very pretty. Here is a picture of a remnant called the Crab Nebula, which is glowing due to the high energy radiation from the neutron star exciting the electrons in the gas: 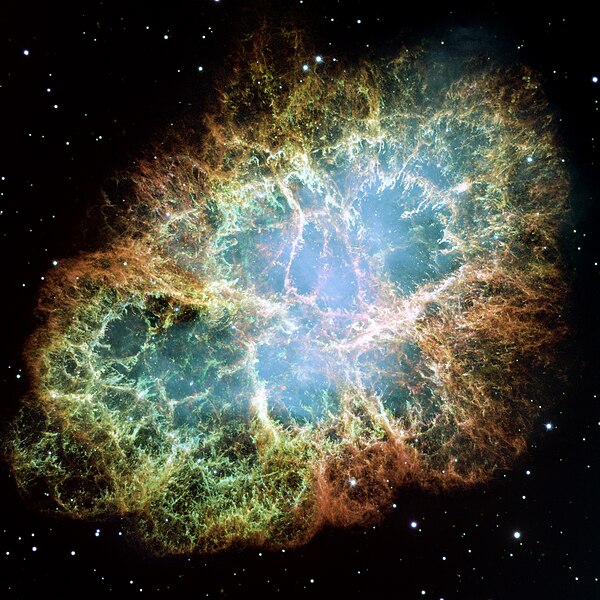 Eventually, that will fade as the gas is spread out, and all that will remain is the neutron star in the center, which is in a long process of cooling down.

The picture I painted above is very general. A star around 8 to 10 solar mass, for example, can undergo supernova even though the core is oxygen-neon-magnesium due to electron capture, and this happens along with an explosive oxygen flash, which while not the cause of the supernova (again, it is due to neutrinos), it is an additional important detail. It is not just the mass, but something called metallicity that affects the process. Before that, it is first important to talk about what happens when even neutron degeneracy can’t hold the gravitational force.

If the core exceeds 2-3 solar mass, even neutron degeneracy can’t hold the gravity of its own mass. It is the Tolman-Oppenheimer-
Volkoff limit. As you can see, there is a huge uncertainty as to what that limit is. That is due to the uncertainties regarding the relationships between states in a neutron star. States are properties like volume, temperature, energy, pressure, etc that describes what is happening to the particles of an object on average. Whatever the limit is, once it is reached, neutron degeneracy pressure can’t hold the gravitational force of the object, and so the star remnant keeps collapsing. Hypothetically, nature might have yet another line of defense against total collapse by forming it into a quark star, made of even more fundamental subatomic particles. They haven’t found one yet, either because it doesn’t exist or the margin of the conditions needed to make it happen is very small, so I will just skip on this one and say there is no particle degeneracy left to hold up the star. The star starts collapsing even further. But wait, it can’t! The Pauli exclusion principle is supreme! Well, nature would rather cover up that awkward fact than to ever allow the principle to be violated. All the matter collapses into a black hole so we never get to see what really goes on! So, is the Pauli exclusion principle actually violated? Or is something else going on? Who knows. Personally, I think nature is a dirty cheater. The laws of physics is getting too extreme? Nope, nope, sorry, you don’t get to see it!

So, after the collapse and explosion, what remains is an object with a gravitational pull so strong that not even light can escape from it. The edge of the black hole is a surface of total blackness (well, it’s not really total blackness due to quantum mechanics, but I am not talking about that) called the event horizon. We don’t know anything inside it because nothing goes faster than the speed of light. If light at the event horizon were going away from the black hole, it would just be hanging there since that is the point in which the escape velocity is exactly the speed of light. Their existence has been confirmed indirectly by detecting objects and swirly gas moving as if an invisible object the mass of a star were pulling on them. Overall, they are very mysterious objects, the most extreme of the stellar corpses.

Now, this is where the concept of metallicity becomes extremely important. You might think metallicity means it is the amount of metals in the ordinary sense. But in astronomy, metal means any element higher than helium. Yes, this sounds ridiculous, but scientists are always in the business of taking words and make the meanings different for their own fields. Anyways, for massive stars, metallicity greatly affects how stars die. The lower the metallicity, the easier it is to have a black hole. That is due to metallicity affecting how much mass stars lose in the process, and the more mass loss there is, the less massive the star ends up as, which means the end product is less massive. There is also a process where the material expelled during a supernova falls back on top of a neutron star, turning it into a black hole. This type of process does not produce bright supernovas.

Wikipedia created a great table summarizing how metallicity and mass affects how a massive star end its life. It is basically a summary of this physics paper in table form. I want you to know though, that this is a year 2002 information, and some of the specifics may have changed. It does show the bigger picture of how things work, though, and that is what I believe is more important for this kind of article.

At the end there is an extreme where stars achieve mass that are in a way legendary, for they are extremely uncommon, and may have existed only for a short time in the early universe. If a star has low metallicity, it may go above 140 solar mass, and end in a process called pair instability, and at even higher mass, by photodisintegration. How do they work? That will be the subject of another post.