This blog is IBY’s own place in the universe, and only he may reside in it. This blog contains his thoughts, what he think is important news (like his minesweeper record), and food for thought (mostly blabbing about science). The reason I do this blog is because I want people to be more interested in science, and if I can persuade at least one person that science is interesting, then I am happy. Anyways, it is called Island Universe because it is like my own little galaxy in which I can write whatever the heck I want. This short post explains the history behind the term island galaxy, and this pop quiz asks you what galaxy I put in the banner. Do you know them all?

IBY’s identity is secret, and only because that is what he nicknamed himself. He is a 20 years old who just graduated Delaware’s Technical Community College. He has an associates in chemistry. He has a huge taste for science and math. He is also irritable and allergic to irrationality and mainstream woos. Rest assured he is persistent and will defend the scientific method until the world ends, or until brain apoptosis occurs from listening to so much stupidity. An astronomer and scientist at heart, he likes to explain those things. When online, he acts like an arrogant jerk with a smarter than thou attitude, and in the real life, he is just a whatever kid. He loves video games, books, piano (he sucks at it), astrophotography, a bit obsessive in minesweeper, and very obsessed with chocolate. He will speak what is in his mind, and if you don’t like it, then you can go to ****

Oh!, and his favorite music is: http://www.youtube.com/watch?v=_nPyLLedfAs 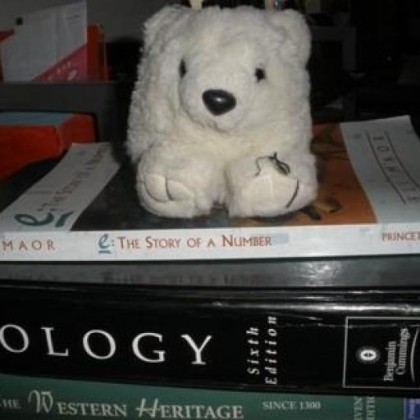